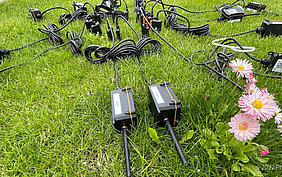 Alpha-Omega Technology GmbH is an expert in IoT infrastructures and operates iot-shop.de, the largest online shop for LPWAN products in German-speaking countries. With its many years of expertise, the company supports the climate protection project "Project Carbdown" of the Carbon Drawdown Initiative. The project is looking for a cost-effective process that enables farmers to sell climate protection certificates for CO₂ reduction on farmland. In cooperation with science and industry, research is being conducted into how CO₂ from the air can be chemically bound on farmland soil with the help of rock flour.

Solutions to reduce carbon dioxide are urgently needed: Without quick and drastic steps, devastating warming is awaiting the planet, the Intergovernmental Panel on Climate Change called for in April this year. The average temperature will continue to rise as long as the proportion of CO₂ in the atmosphere increases. The emission of greenhouse gases must be stopped, but also existing carbon dioxide must be filtered out of the air and the sea. There are various methods to create negative emissions. One is "Enhanced Weathering". Project Carbdown" relies on this process.

Speed up the natural decomposition process
Basalt, an established fertiliser, reacts with CO₂ from the air during weathering. Each ton binds about 0.3 tons of CO₂ in the process. Harmless carbonates are formed that bind the CO₂ for a very long time and therefore remove it from the atmosphere. This process has been going on everywhere on earth for billions of years. This natural process can be accelerated by finely grinding the rock in order to increase the surface area and spreading it on biologically active, agricultural land. This could make a substantial contribution to Germany's climate neutrality by 2050. Measurements of how long it takes for the degradation process on farmland are still missing. In the laboratory, the measurement of CO₂ uptake is already succeeding. On the test fields, the project team is now looking for a simpler measurement method for the CO₂ collection rate that does not require complex laboratory technology. To this end, several hundred scientific instruments were buried, from which water samples are regularly taken for the laboratory and various values are measured and determined electronically.

LoRaWAN sensors measure underground
Alpha-Omega Technology provides parts of the technical infrastructure for the measurements and assists the project team free of charge. Sensors from the manufacturers Dragino and Milesight are used to determine humidity, temperature, conductivity and the pH value of the soil and to record other environmental parameters. The LoRaWAN packets are received via gateways from the manufacturer Kerlink. The probes of the sensors are buried and the radio module connected with a robust cable sends the data above ground. The sensors are characterised by stable outdoor housing, a battery life lasting for years and high reliability at a favourable price of less than 100 Euros. In addition, sensors from the manufacturer Barani Design closely measure rainfall and temperature. The measurement data is transmitted using the open radio standard LoRaWAN. Today, the market offers a large selection of LoRaWAN sensors, which leads to moderate prices. Compared to the laboratory measurements, which are only taken weekly or monthly, the continuous electronic measurements also provide information on how the pH value and conductivity, for example, change shortly after weather events.

At the end of the development, the amount of carbon dioxide removed from the atmosphere per hectare and year is to be documented and certified. In future, for example, farmers would be able to prove how much carbon dioxide they capture per field, which would open up a source of income for them through certificate trading.