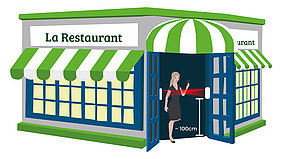 Alpha-Omega Technology GmbH & Co. KG is an expert in IoT infrastructures and the operator of the largest online shop for LPWAN products in German-speaking countries. The company sees three trends for sensor-based IoT in the coming year:

Sensor-based IoT is increasingly being used for health and climate protection measures and is thus becoming part of everyday life. With the Corona pandemic and the SARS-CoV-2 occupational health and safety rules, for example, the issue of air quality has come to the attention of the general public. The use of smart sensor technology is also no longer a pipe dream for active climate protection: this is proven by innovative climate protection projects such as the "Project Carbdown" of the Carbon Drawdown Initiative. The initiators want to bind CO2 with the help of rock flour on arable land. A sensor-based LoRaWAN-IoT measures the absorbed CO2. Sensors record the data underground at different soil depths.

Low Power Wide Area Network (LPWAN) radio standards such as Long Range Wide Area Network, LoRaWAN for short, or Narrowband IoT, NB-IoT for short, are suitable for transmitting the measured values to a server for further evaluation in compliance with data protection regulations. They can transmit small amounts of data over long distances with low power consumption. The combination of several LPWAN technologies is in vogue: until now, the focus has mostly been on the question of which is the best radio standard for a sensor-based IoT. But each solution has advantages and disadvantages. Those who know the differences and combine them cleverly can get more out of their networked sensors and create potential for savings, maintenance or danger prevention. The possible applications range from facility management to smart farms and smart cities.

With the spread of sensor-based IoT, interest is also growing in solutions to analyse the collected data, visualise it dynamically and store it for the long term. In addition to easy-to-use platforms such as Datacake, where you can create dashboards yourself without programming, special solutions will increasingly be offered in the future that can be used to perform a specific task well.

Business analysis services such as Microsoft's Power BI are also experiencing increasing demand. They help to automatically process large amounts of complex data from different sources. Among the major providers, one finds powerful services in the areas of data analytics and data insights.

By means of a large number of interfaces, internal database, analysis tools and visualisation software, the IoT Edge platform BITMOTECOsystem makes it possible for companies with little know-how to use IoT effectively and to make sensor data available throughout the entire company network. "The integration of sensors and easy-to-use IoT platforms such as BITMOTECOsystem into the ongoing production process of medium-sized companies opens up enormous potential," says Jan Bose, CEO of Alpha-Omega Technology GmbH. "The platforms can take over very many tasks such as fill level monitoring and thus alert in time to avoid production downtimes. In the long run, data can also be collected in this way. On the basis of this data, the platform can send an automatic message to the purchasing department either via an alarm when the limit value is exceeded or via the average consumption. This enables the purchasing department to place a new order in time, avoid overstocking and conserve space and resources."