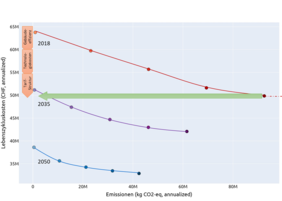 Collaboration with Local Energy Suppliers for a Tailor-made Solution

In 2020, Sympheny collaborated with EnergieWasser Chur (IBC) and Elimes to develop a strategy for the future development of the energy system of the city of Chur. The aim was to find out which technologies and which renewable energy sources are best suited to supply the city of Chur in the future. The most important information to be gained from the optimization was twofold: first, to directly compare the cost of energy systems with the emissions generated, and second, to quantify early and on a large scale the scale and type of investments needed to transition to a net-zero energy system.

Features of the Sympheny Analysis

The first step was to model a catalog of possible conversion and storage technologies for the energy hub of the city of Chur. Each technology was defined by the energy carrier, inputs and outputs, conversion efficiency, investment costs, and maintenance costs. Production surpluses were defined to be exported. Various constraints were set to limit the use of certain technologies, e.g., that only a certain amount of wood is available per year so as not to overburden regional resources.

Making strategic decisions based on the identified key drivers.

Once the three scenarios were modeled, they were optimized: The Sympheny algorithm selected and sized technologies that would meet the given energy demand at optimal cost and CO2 emissions ,on the so-called Pareto front.

From the results, it can be seen that a conversion of today's energy supply to a CO2-free energy supply in 2035 is possible with similar life cycle costs as in 2018. The three main drivers that make such a solution possible are:

2. lowering technology costs through economies of scale; and

It should be noted that the energy system needs to be restructured to use only renewable energy technologies, which in some cases requires massive investments. However, it has been shown that with these investments, the new energy system based entirely on renewable energy can be operated with similar life cycle costs as the current system. The simulations and optimizations have also shown that in the future renewable gas and renewable electricity must be secured through long-term supply contracts in order to achieve attractive energy prices for the converted energy system.