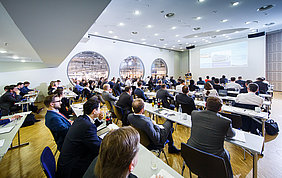 Public utility companies must stay on the ball and focus on digitisation if they want to meet their customers’ demands. This was one conclusion of the specialist congress entitled “Digitisation - Brave New World?” Topics such as smart meter roll-out and weather derivatives dominated day two.

Digitisation has rapidly and radically changed customer demands, forcing energy providers into roles that are outside of their sector. Companies who react too slowly to this change, which is affecting society as a whole, could fall by the wayside. This was a key message of the specialist congress entitled “Digitisation - Brave New World?” There is no choice for public utility companies other than to embrace the technologies that are available. In terms of the design, functionality and speed of the range of products on offer, they need to align themselves with online portals such as Amazon and Ebay. This is key to ensuring that customers are satisfied.

Frank Höpner, Head of Business Development and Strategy at Engie Deutschland, stressed that changing expectations also create new challenges for marketing departments. He believes that hardly any ready-made services will be sold in the future. Sales representatives will design products in line with individual customer requirements directly at the customer’s premises. Under its digitisation strategy, Engie itself has gradually moved away from its original core business, he said. The group has refined the range of services it offers accordingly. It is a case of taking over the interface between the energy sector and the housing industry or between energy and mobility.

Public utility companies want to continue to be fundamentally responsible for metering operations.

A survey of 180 public utility companies on the topic of the smart meter roll-out indicates that the majority of public utility companies do not want to give up their role of being fundamentally responsible for metering operations. The public utility group Trianel and the IT service provider RKU IT presented this result at E-world. “We did not identify a single company that wanted to give up its fundamental responsibility,” said Thomas Spinnen, Divisional Head of Trianel. The survey also found that public utility companies had been involved in this issue to varying extents until now. Answers ranged from “Here is our roll-out plan” right up to “That’s never going to be accepted anyway”. Jürgen Bonin, Divisional Head of Product Management at RKU IT, explained: “It must be said that the tendency is, the smaller the provider, the less they are involved in the subject.” The larger public utility companies with more than 500,000 metering points were already much more advanced in their deliberations and had concrete ideas of how the new tasks would affect their companies.

The consultancy firm LBD presented another study on behalf of EnBW, Eltel and EVB. Their conclusion: Grid operators with up to 30,000 metering points should outsource all the services involved in intelligent meter operation. Otherwise it would not be economically viable. Gateway-Administration says it is only worthwhile for companies with over one million metering points, said Andreas Gnilka from LBD. Gnilka went on to say that companies with more than 30,000 metering points would be able to transform their own services in a cost-effective way.

Trade in weather derivatives is growing

Trading in weather derivatives is no longer a niche market and is slowly but surely improving - this was the general view of the “Weather Day” congress at E-world in Essen. Jens Boening from EDF Trading explained that most of the large energy providers are now safeguarding against weather risks, some of them with their own weather desk. The energy providers’ trading partners are either reinsurers, who have been hedging weather risks for decades, or other energy providers. The latter do not always have the same risks and are able to extend their business in this way. Boening gave the example of French providers, who, during a cold spell, need more electricity than their German colleagues due to the large number of electric heating systems in France. Financial instruments are traded, which are dependent on meteorological indices. For the gas trade, temperatures are especially decisive; for the trade in electricity wind force is critical. No wind - no cash flow. “The hedging programmes of the large providers start in May or June, when no-one knows exactly what the winter will be like,” explained Thomas Kammann, Managing Director of Energy Risk Solutions. At that point relatively inexpensive protection is still possible and adequate volume is still available.