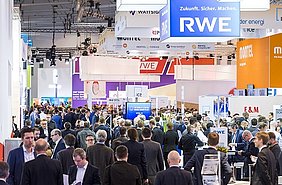 E world energy & water has once more provided impressive proof of its position as Europe's leading trade fair in the energy industry: For the first time, 750 exhibitors (more than ever before) from 26 nations presented their solutions for the future of the energy supply at Messe Essen. Digitalisation, flexibilisation and decentralisation were the defining subjects on which the over 25,000 visitors from 73 nations obtained information and exchanged ideas.

"This impressive response shows: More than ever, E world is the trendsetting and most important platform in its sector. The decision takers congregate here: 76 percent of the visitors are active in management functions - a strong value which has risen again in comparison with the previous year. The number of trade visitors was on the same excellently high level as in the previous year," according to Oliver P. Kuhrt, CEO of Messe Essen. Dr. Niels Ellwanger, Chairman of con|energy ag: "All the large and important companies in the energy industry presented themselves at E world 2018. The defining subject on many fair booths was the 'Smart City'. The displayed solutions and the lively exchange of ideas amongst the experts once more sent important signals into the sector and beyond. With their presence, discussions and know-how, exhibitors and trade visitors made the fair Europe's energy capital three days' long."

"Smart City" Was the Defining Subject at E world 2018

The visitors flocked to E world, above all, from energy suppliers, service providers, industrial companies and municipal utility companies. It was clearly shown: The path towards smart cities (with optimum networks with regard to intelligence and energy) is causing both companies and consumers to have a rethink about the energy supply. No matter whether networks for the exchange of heat between various buildings, intelligent charging concepts for electric cars or solar roof tiles for the generation of electricity and heat: Numerous exhibitors showed innovations.

Digitalisation is the key to the success of the energy transition, according to Prof. Dr. Andreas Pinkwart, North Rhine-Westphalia's Minister for Economic and Digital Affairs, during the opening ceremony of E world: "The energy system of the future is decentralised, digital and smart. Today, ever more decentralised generation installations are already being bundled, controlled and networked using IT solutions. For our companies, these innovations are opening up the chance to develop new business fields."

It is primarily young companies with innovative ideas which are providing new stimuli in the energy sector. In Fair Hall 7, over 90 start-ups, freshly founded firms and research institutes showed what products the consumers can expect in the future. These included portable storage units for solar power, battery storage units with artificial intelligence and new meter reading possibilities. Within the framework of the fair, particularly pioneering digital solutions were distinguished with the Digital Energy Award. In the "Lean Operations" category, MeteoViva Climate was convincing with an intelligent climate control system. gridX, the winner in the “Customer Engagement” category, is an energy supplier which markets locally generated, clean power just as locally via a platform. In the "New Business Models" category, Novum engineering was distinguished for its ThermoTape with which the filling levels of thermal storage units can be monitored easily from the outside.

Moreover, E world was once again a springboard for young interested people: The Career Forum on the last day of the fair brought students, graduates and young professionals together with companies.

Strong International Presence Emphasises the Significance of the Trade Fair

E-world 2018 was characterised by strong international interest. The exhibitors came from 26 nations. On the visitor side, too, the trade fair could be pleased about the response from all over the world: The participants who obtained information about new solutions for the energy supply on the Consulates Day at Messe Essen extended from China via Kuwait and Madagascar right up to Greece and Taiwan. Europe's premier fair in the energy industry had invited ambassadors, consuls general, consuls, economic attachés as well as employees of economic development companies and chambers of foreign trade to this event. All in all, one in five of the visitors travelled to the fair from abroad. Great Britain, Switzerland, the Netherlands and Italy were particularly strongly represented.

The supporting programme with a high-ranking cast offered precious value added. Already within the framework of the Energy Industry Leadership Meeting on the day before the fair, Bernd Westphal, Spokesman of the Economics & Energy Working Group of the Parliamentary Group of the Social Democratic Party of Germany in the Lower House of the German Parliament, gave his assessment of the political points set for the energy world in the draft of the new coalition agreement. On the first day of the fair, around 630 participants obtained information about the subject of "North Rhine-Westphalia Goes Energy 4.0" at the Specialist Congress for Future Energies staged by the North Rhine-Westphalia Energy Agency. During E-world, the experts speaking at the fair-accompanying congress included those from the International Energy Agency, Volkswagen, Uniper, the Federal Ministry for Economic Affairs, Vattenfall and Verivox. Directly at the fair, the visitors had the possibility of obtaining information in forums. Here, the subjects were, for example, networks, smart meters and storage units, network management in decentralised energy systems and big data in the energy industry.

A large number of satisfied exhibitors and visitors praised E world 2018, its range on offer and the supporting programme. More than nine out of ten visitors will recommend the fair. The exhibitors highlighted, above all, the high quality of the trade visitors. 93 percent of the companies were satisfied with their appearances at the fair. Likewise, 93 percent of the exhibitors now already indicated that they would also be involved in E world 2019 which will take place at Messe Essen from February 5 to 7, 2019.

E world is jointly organised by con|energy and Messe Essen. It recorded 750 (in 2017: 710) exhibitors from 26 (25) nations. The proportion of foreign exhibitors was 21 (20) percent. Also including the forecast for the last day of the fair, 22,500 (22,000) registered trade visitors came to Messe Essen (according to the Society for Voluntary Control of Fair and Exhibition Statistics - FKM). The comprehensive supporting programmes were visited not only by international participants but also, amongst others, by guests of honour, press representatives and influencers, municipal representatives and sponsors. The trade visitor proportion was 97.9 (98.8) percent.

"E world 2018 has met our expectations in full. The visitor response all in all and on our booth was gigantic and the number of discussions was, at least, on the same level as in the previous year. Moreover, the abundance of subjects and innovations exceeded last year's level in my eyes. The extremely well-versed trade public was thus able to take away with it a lot of new information - no matter whether from established companies, new cooperation ventures or the numerous start-ups."

Lars Quiring, Member of the Board, GET AG:

"For us as a Leipzig-based information service provider with a nationwide radius of action, E world has had a high status for years. Here, we not only meet customers and interested parties but we also act in close alliance with a large number of solution partners. This year, we have considerably extended our own presence at the fair with a new booth in Hall 7. In our flagship, the web-based cockpit for market analysis, product calculation and sales control, visitors paid attention, in particular, to pricing scenarios with regard to the intelligent operation of measuring points - and also to the possibility of placing products in sales channels with far-reaching coverage or tariff comparisons in the Austrian power market."

"Just like every year, E world constitutes a successful mixture of a family meeting of the sector and a professional platform for winning over new contacts. We are taking away with us a lot of stimuli from exhibiting companies and, for our part, were able to provide some good highlights. The expectations of us as well as of our partners were thus more than met."

"Our participation in E world 2018 has been more than just worthwhile. From 9 a.m. to 6 p.m., our employees continuously held high-quality discussions on the eight discussion islands. We received a lot of positive feedback about our booth party, too. Not only the quality of the fair but also our comprehensive planning measures which we invested in the run-up to E world contributed to the success. Moreover, we are very satisfied with the services rendered by Messe Essen: from the catering to the security - everything functioned smoothly. Next year, we will definitely take part in it again."

"For us, this year's E world was the premiere - and a total success! We were able to greet our most important target groups on the booth and were very satisfied with the quality of the visitors. On our booth, it was clearly discernible that digital energy services are becoming ever more significant. As the leading energy fair in Germany, E world is very important to us."

"With around 630 German and international participants as well as the opening by the North Rhine-Westphalia Minister for Economic Affairs, Prof. Pinkwart, and the North Rhine-Westphalia Minister for Environment, Mrs. Schulze Föcking, our 22nd Specialist Congress for Future Energies was the successful kick-off event at the 18th E world energy & water in Essen in 2018. The main subject areas at the specialist congress and the expert forums were the chances and risks of the digitalisation of the international energy world and the chances for innovative start-up companies on the energy scene."

"Kiwigrid has presented the solutions which are based on IoT and iMSys and were developed together with customers. BMW, innogy, Sharp, the enviaM group and Solarwatt have introduced their products in specialist lectures. Our successful appearance was rounded off by two podium discussions on the subejcts of IoT, sector coupling and iMSys. The speakers included Martin Herrmann (innogy), Dr. Andreas Auerbach (enviaM), Jochen Schneider (coneva), Peter Zayer (FNN/Voltaris), Peter Thiele (Sharp) and Paul-Vincent Abs (E.ON Metering)."

"We are pleased that E world is going along with the transformation of the energy industry and has extended its spectrum considerably in last few years. The fair is changing from a fair of energy suppliers also towards a fair for energy suppliers. With our portfolio of energy, technology and services, E world is, in the meantime, a good place in order to speak not only about smart building management, district development, e mobility and tenants' electricity but also about innovative solutions for indoor navigation. The fair has become an important meeting place for the international colleagues of ENGIE, too."

Jörg Bauth, Sole Managing Director and Chairman of the Management Board, natGAS Aktiengesellschaft:

"This year, the fair has surpassed our expectations by far: The onrush on our booth was overwhelming - not least because we have staged thematically highly topical events relating to the market and system integration of the renewables. The great interest is also down to the political situation which is causing great planning uncertainty - thus, our customers are placing ever more trust in our digitalisation competence and optimisation recommendations."

"For EnBW, E world is an important forum in order to present ourselves as an operator of infrastructure. We are pleased about the many visitors this year, a lot of good discussions and the great interest in our smart city solutions, from e mobility via IT security right up to district development and the intelligent operation of measuring points."