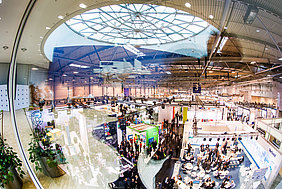 Digitisation, decentralisation and decarbonisation are shaking up the energy industry. This year’s E-world reflects this with innovative solutions for the energy supply of the future. The Congress that accompanies it and associated fringe events pick up on these topics and provide information as well as a forum for discussion. The growing number of exhibitors represent a large part of the networked energy world, with 200 new companies - including 90 start-ups.

In 2018, E-world continues to be the leading trade fair for the energy industry, and therefore the top forum for discussing challenges, opportunities and solutions. 750 companies, institutions and associations, including 200 new exhibitors and 90 start-ups, are presenting themselves at E-world. The E-world is also increasingly international, which can be seen by the growing number of foreign firms, as made clear by Niels Ellwanger, Conenergy Chairman.

Congress and Side Events encourage discussion

The Conference and Congress programs running parallel to the trade fair take an in-depth look at the topics of sector coupling, networking and digitisation. Digital, smart and efficient energy services for the domestic market and industry were on the agenda on the first day of the conference. Whether the subject was local energy generation, the heating market 2.0 or innovative new energy services in industry - all Congress attendees took home lots of new ideas and food for thought.

And the themed areas of “Smart Energy” and “Innovation” also represent this movement in the energy industry. “Smart Energy” makes effective networking and management of energy generators, storage systems and consumers, as well as IT security and energy efficiency, a practical proposition. It is no wonder that this themed area is growing so rapidly every year as the pace of change picks up. “Smart Energy” may now be well established, but young and innovative companies, start-ups, as well as science and research institutes still have plenty of new ideas for the energy world of the future, as they demonstrate in the “Innovation” themed area. The forums taking place in both themed areas offer an open invitation to get information and join in lively debate.

The energy sector demonstrates at E-world that it is well equipped for the challenges which arise from digitisation, decentralisation and decarbonisation. This was made clear at the start of the three-day trade fair and Congress event by many prominent representatives of the industry. Companies have long since been addressing the new challenges and developing innovative business models, said Johannes Kempmann, President of the umbrella organisation BDEW. He also made it clear, with reference to the German coalition negotiations, that the energy industry depends on the frame of reference within which it operates like no other. In terms of energy policy, he could see “light and shade” but no “big deal” as yet. At the “Energy Leadership meeting” in the run-up to the trade fair, Kempmann had already criticised the lack of ambition in the decisions on energy policy of the coalition agreement between the Christian Democratic Union (CDU) and the Social Democratic Party (SPD). “I don’t see any clear commitment to gas, whereas in the long term gas isn’t part of the problem, but will have to be part of the solution,” declared the BDEW President. On the topic of sector coupling, Kempmann raised the issue of a “level playing field” in respect of the differing burdens on individual energy sources. He praised the positive attitude of the CDU/SPD coalition to renewable energy sources, but felt there was a “lack of imagination” in their market integration policy. In his view, the threat of overloading the networks is a “massive problem” which the coalition white paper had not sufficiently addressed.

Unlike the BDEW, BEE Managing Director Peter Röttgen felt reasonably satisfied with the content of the section on energy and climate change in the possible new coalition agreement. We welcome what we are hearing from Berlin,” said Röttgen at the Leadership Meeting. The Managing Director of the Renewables Association expressed his hope that the topics of special write-downs for renewables, a renewables target of 65% by 2030 and a proper discussion of fossil fuel phase-out would now come to the fore. The same would apply to the inclusion of heat and transport under sector coupling. In connection with this, it was time for a new design of the market for renewable energy. This is the only way that renewable sources can actually be competitive in the marketplace, said Röttgen. “We can’t be made wait any longer,” was his stark reminder of the need for speed in forming a coalition government. Röttgen was in favour of a reform of the levies system, and a CO2 charge applicable across all sectors. It was illogical to want an energy transition, but not to place corresponding value on low-emission technology. “And that’s the effect of CO2 pricing at the moment,” is how he reinforced his demands.

“Expansion of the network depends on politicians standing firm and not failing,” Homann warned at the Leadership Meeting. Expansion of the networks remained the Achilles heel of the energy transition. If Germany fails to meet its network expansion targets by 2025, there will be consequences, emphasised Homann. “The EU will then divide Germany into price zones.” The EU was giving itself the necessary powers through the “Clean Energy Package”. This was in nobody’s political interest in Germany, according to the Head of the regulatory authority.

Heat, transport and agriculture should deliver

At the Leadership Meeting, Bernd Westphal, energy policy spokesman for the SPD parliamentary party, announced that a new major coalition would commit to including heat and transport in their climate protection policy. He conceded that the energy industry was the major pillar in German climate protection efforts. In other sectors, on the other hand, there was still a lot of potential. Heating, transport and agriculture would now have to deliver, said Westphal.

Andreas Pinkwart (FDP), Minister for Economic Affairs for North Rhine Westphalia (NRW), put in a plea for sector coupling. Energy sectors should not be looked at individually, the transport and heating sectors should be included. Pinkwart demanded “clear sector targets” as well as “intersectoral targets” from a new German government. He considers this to be ambitious, but also feasible through digitisation. Berlin must not lose sight of the triple target in energy policy of security of supply, environmental friendliness and affordability. The Paris climate objectives should be implemented, but competitivity and jobs preserved.

The networking of sectors is a key topic at this year’s E-world - with its “Smart City” slogan. The energy transition offers challenges and opportunities, stressed Niels Ellwanger, Chairman of Conenergy AG. Innovation would not stop at cities, Ellwanger continued. Progress in digitisation would make the smart networking of electricity and heating, efficient buildings and electric transport possible.