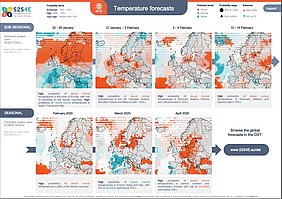 Northern and Central Europe are likely to continue to see milder than normal weather until the end of April, the latest long-term forecast from the S2S4E Decision Support Tool shows.

In the south-western part of Europe, however, temperatures are forecast to be below the seasonal norm the next three months, particularly in March.

Wind forecasts for February show enhanced probabilities of above average winds in the northern Atlantic, moving across Scandinavia through Finland. Central and Southern Europe may see normal to below normal wind speeds.

Although poor skill and unclear patterns are observed in the precipitation forecasts for mainland Europe, the S2S4E outlook depicts relatively extended areas in Sweden with below normal precipitation in February.

This pattern may move westwards to Norway in March. The Balkans are also likely to see less precipitation than average in March.

And below normal solar

Increased solar radiation may occur in the Black Sea region in March, and these positive anomalies may persist into April, extending over other areas in Germany, France and the central Mediterranean.

S2S4E (Sub-Seasonal to Seasonal Climate Forecasting for Energy) is a project funded by the EU's research and innovation programme Horizon 2020, which is working to make long-term forecasts more reliable and useful.

To achieve this goal, S2S4E has developed a new forecasting tool particularly tailored for the energy industry – the S2S4E Decision Support Tool – which is free to use at least until the end of November 2020.

11-13 February: Meet us at the Montel stand, hall 3, where we will demonstrate our new forecasting tool.

11 February at 15:00: Presentation by Llorenç Lledó from Barcelona Supercomputing Center in hall 1, as part of the E-World Trading and Finance Forum session entitled “From Futuristic to Normal: AI and Climate Predictions for Forecasting and Trading”.

Website: www.s2s4e.eu. If you have any questions, please send an e-mail to s2s4e@bsc.es.

This spring was dominated by digital events. Whether within the E-world Community or at the Digital Career Forum: Even if the personal meeting was missing - the direct exchange continued.

Concrete opening perspectives and the positive development of the energy industry are reflected in the good registration figures for its leading trade fair. 15.000 square meters of the exhibition area of E-world energy & water, which will be held at Messe Essen from February 8 to 10, 2022, have already been booked.

Strong interest in Europe's leading trade fair for the energy industry: 50 per cent of the 2020 area are already allocated.

Premiere at Europe's leading trade fair for the energy industry: this year, the E-world energy & water Career Forum will take place for the first time as a purely digital format.