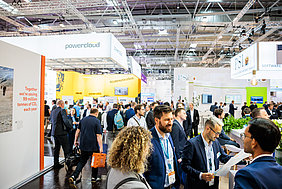 Energy supply has rarely been as topical as it is right now. This was clear from the strong feedback for E-world energy & water, which was held from 21 to 23 June 2022. 736 exhibitors – almost at pre-pandemic levels – from 27 nations showcased their innovations for sustainable energy supply at Europe's leading trade fair for the energy industry in front of around 15,000 trade visitors. At the same time, a great many experts in business and politics also exchanged views in more than 50 conferences and forums at Messe Essen. “The many intensive discussions at E-world showed that this trade fair is the platform for the industry to talk to each other and approach current challenges strategically”, commented Stefanie Hamm, Managing Director of E-world. Her Board colleague Sabina Großkreuz added: “The high share of trade visitors of 99 percent and the excellent visitor satisfaction level of 96 percent impressively highlight how important our trade fair is.”

The majority of the trade visitors came to Messe Essen from energy suppliers, public utility companies and service companies, particularly with the intention of finding out about the trade and production of energy, services, mobility and IT. The companies presented solutions for the energy transition, in which digitisation plays a major role. The reason for this is that it facilitates smart connection and management of power grids, generators and consumers. Products and services related to diversified energy production, storage solutions and e-mobility were presented as important pillars on the way to achieving sustainable energy supply.

“E-world was a resounding success and once again it has proven that it merits its status as the leading industry trade fair”, commented Marco Beicht, CEO and founder of powercloud GmbH. “For the first time, our company was represented on the exhibition stand along with numerous partners, meaning that we could give an impressively tangible presentation of the powercloud ecosystem to our visitors. During the trade fair, we announced the takeover of the B2B billing specialists EN2GO. Why here? Because this year, all the decision-makers in the industry have once again come together, just like a big annual family gathering.”

“There was no better moment for the European energy industry to reconnect after a long time. Current reshaping of gas markets to ensure security of supply requires creativity and decisiveness - and it has been very helpful to exchange many opinions and views. Also, future-oriented topics - such as low-carbon commodities, PtX and biomethane - need to be developed in strong partnerships and we did our best to strengthen them at the E-world“, according to Dr. Grigory Shevchenko, Senior Account Manager Gas Supply & Origination from Uniper.

Experts see hydrogen as the energy source of the future

In the halls and conferences of the trade fair, many E-world experts agreed on one thing: Action is needed to ensure the security, climate neutrality and affordability of energy supply. There was a plea from numerous sides for greater use of hydrogen as an energy carrier. Andreas Pinkwart, North Rhine-Westphalia's Economics Minister, advocated the expansion of the hydrogen infrastructure, after describing energy costs as the “bread price of the 21st century”. Kerstin Andreae, Chairwoman of the Executive Board of the German Association of Energy and Water Industries e.V. (BDEW) also identifies the goal of “developing hydrogen as a new pillar of the energy industry”.

Many companies were showcasing how this can work on their exhibition stands. Amongst other things, options for the production and storage of hydrogen were presented, or the specific use of the element to power aircraft carriers for the maintenance of pipelines or power lines. Interest amongst E-world's visitors was strong. Thorsten Kasten, Board Member of the German Hydrogen and Fuel Cell Association (DWV) said: “Hydrogen has become the hot topic for the energy industry. The current geopolitical situation and the associated shortage of natural gas have contributed to H2 taking on such a significant role. With the “hydrogen solutions” community stand, this year E-world has succeeded in making a good start at giving hydrogen a presence on the stage at the trade fair. Our entertaining series of talks at the stand allowed us to pass on important stimuli from the hydrogen industry to the trade public. We are looking forward to next year - then with a dedicated hydrogen hall to bring the entire H2 value chain together in one area.”

Stefan Schwan, Head of the Energy & Facility Solutions at ENGIE Deutschland GmbH: “Since the last E-world trade fair, the world has changed immensely. Green, affordable and above all safe energy is more important than ever before. With the focal topics of our trade fair – renewable energy, green hydrogen and efficient energy solutions – we have our finger right on the pulse of our times, which was apparent from the countless interesting exchanges taking place at our stand and at our lectures.”

Once again, E-world was accompanied by a top-class programme of conferences and forums. At the Energy Leadership Meeting, the cuts in gas supply were the topic of many discussion sessions, which focused on the challenges facing politics, business and grid operators. The Future Congress of the new regional agency for energy and climate protection in North Rhine-Westphalia, Energy4Climate, was held for the first time, and 550 participants attended the première. There was also a great deal of interest in the many lectures and discussions in the freely accessible forum areas in the exhibition halls – amongst others, Klaus Müller, the President of the German Federal Network Agency, Klaus-Dieter Maubach, the CEO of Uniper and Thomas König, Member of the Board of Management of E.ON, all spoke about security of supply and the impact of the conflict in Ukraine.

At the same time, the trade fair shone a spotlight on plenty of other topics that are currently occupying the energy industry. In order to promote the international discussions which are vital for a global energy transition, around 50 ambassadors, consuls general, consuls, economic attachés and employees of economic development companies met on the second day of the trade fair for the Day of Consulates. For the first time, the E-world.prototype.club gave individuals with an outstanding talent for IT the opportunity to develop practical solutions for the digitisation of the energy industry. The CoVerified and Zentur.io teams showed off their prototypes for a simple energy management system, which they had developed for the network partners NEW-Gruppe, Stadtwerke Bonn GmbH and SWP Stadtwerke Pforzheim GmbH & Co. KG. The career forum brought together students and young professionals with representatives of companies on the last day of the trade fair, and its aim was to inspire enthusiasm for the industry.

Visitors gave this comprehensive and future-oriented combination of a trade fair and a congress top marks. 94 percent of visitors commended the fact that market leaders were present. The leading trade fair also confirmed its appeal at a European level: More than one in every four trade fair visitor had travelled from outside Germany. Guests from Great Britain, Denmark and the Netherlands were particularly well represented. 93 percent of visitors and 95 percent of exhibitors also wish to take part in the next E-world energy & water, which will be held from 23 to 25 May 2023 at Messe Essen.

E-world is jointly organised by con|energy and Messe Essen. 736 exhibitors from 27 nations were present at the trade fair. Including the last day of the fair, there were a projected approx. 15,000 registered trade visitors (Association for Voluntary Control of Trade Fair and Exhibition Statistics – FKM). The extensive framework programme was attended by guests of honour, press representatives and influencers in addition to international participants. The proportion of trade visitors was 99 percent.