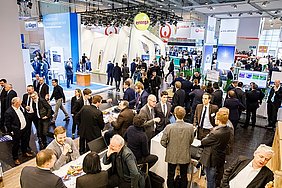 On the morning of the second day of E-world, many of the visitors to the trade fair and Congresses had one eye on developments in Berlin. Potential members of the “Grand Coalition” government were announcing the result of their negotiations. The industry get-together offered a good forum for discussing the agreement from the perspective of the energy industry, as well as diverse other topics and information relevant to the industry.

An international delegation also took the opportunity to find out more on the Day of the Consulates.  Ambassadors, General Consuls, Consuls, Economic Attachés and staff from economic development agencies and chambers of foreign trade throughout Europe exchanged information on current hot topics in the energy industry. The same was true of the “Innovation Forum” at E-world on the topic of “Smart Cities - an international glimpse of the future”.

Representatives of the gas industry at the E-world Congress looked into the question of what prospects the new world of energy had to offer its energy sources. The topics Power to Gas, hydrogen and biomethane were presented and discussed in detail. A key factor here will be that gas as an energy source, in contrast to electricity, will in future remain more strongly exposed to international developments, stressed Bart Riemens, Manager of the Gas Trading department at Axpo.

The industry initiative Future for Natural Gas presented a study prepared by Nymoen Strategieberatung. This shows that neighbourhood solutions with gas-fired combined heat and power generation could make a significant contribution to a cheap and environmentally-friendly source of heating. Both in new and existing buildings, the consultants’ model calculations demonstrated that gas-based combined heat and power could provide the cheapest and cleanest solutions, Future for Natural Gas reported.

The joint German-Austrian electrricity pricing zone which has existed for years will be boken up promptly in October, according to the electricity exchange Epex Spot. The trading platform is working together with partners on the division into two order books, so that in future the price of electricity can vary between Germany and Austria. Whereas Austria’s industry is sounding the alarm about increases in the price of electricity, Wolfram Vogel, Director Public & Regulatory Affairs at the electricity exchange Epex Spot, told energate that he did not believe in an automated system.

Together with energy supplier EWE, Epex is also launching a local market platform to avoid grid bottlenecks. As part of the electricity grid research project “Enera”, regional flexibility is to be traded via the platform. The agreement to cooperate on the project was signed by Stefan Dohler, Chairman of the Board at EWE, and Jean-Francois Conil-Lacoste, CEO of Epex Spot, at E-world 2018. Distribution network operators Avacon and EWE Netz, and the transmission network operator Tennet, are partners in the project. Implementation of the platform is scheduled for this year, after which a two-year demonstration phase will run as “proof of concept”.

Public utilities in Aachen, Düren and Stolberg, as well as NEW AG with its headquarters in Mönchengladbach, have announced their participation in a joint subsidiary for smart grid operation. “DEM GmbH” will support energy providers and grid operators in developing smart networks, said Managing Director Stefan Röder at the energy trade fair “E-world”. The company will have four areas of expertise overall.

BMW has commissioned a large-scale battery at its works in Leipzig. A total of 700 batteries for the BMW electric model “i3” will in future make 15,000 kWh of capacity available, said Dominik Becks, Senior Manager Energy Services at BMW, at one of the trade fair’s fringe events.  Its cooperation partner in the project is the direct marketer Energy2Market (E2M), which is including the storage system in its virtual power station, and will market it as primary balancing power. The storage system has already been prequalified by the transmission grid operator 50 Hertz.