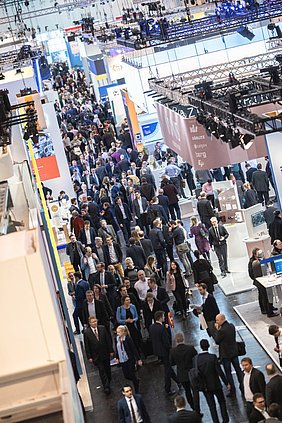 E world energy & water offered an impressive look into the future of the energy supply. At Europe's leading fair in the energy industry, 780 exhibitors (a new record) from 26 nations presented their innovative products and services to the once more over 25,000 trade visitors. In this respect, it became apparent at Messe Essen: Digitalisation is opening up totally new development potential for the sector. Intelligent solutions are networking the energy supply of whole districts, are controlling the electricity consumption of the households while conserving resources and are strengthening the infrastructure of electromobility. Numerous decision takers from the political and economic fields and from associations used the three days of the E world fair in order to exchange ideas about the defining subjects in the sector, to establish new contacts and to obtain valuable information.

"Europe's leading fair in the energy industry has once more highlighted that it is the 'place to be' for the entire sector. That is also shown by the high proportion of international visitors which was ten percent higher than last year. We are particularly pleased that we were once again able to greet more decision takers. Four out of five E world visitors perform management functions. That optimally reflects the significance of the trade fair," according to Oliver P. Kuhrt, CEO of Messe Essen. Dr. Niels Ellwanger, Chairman of con|energy ag: "With 780 companies, more exhibitors than ever before presented themselves at E world. All the important players in the energy industry were represented. Together with numerous start-ups, associations and institutions, they showed, under the leitmotifs called 'Smart Cities' and 'Climate Solutions', innovative solutions which will exert crucial influences on the energy supply of tomorrow."

Networked Cities and Climate-Friendly Solutions as Guiding Subjects
Digital innovations will play an important role for the future of the energy sector. Because intelligently equipped, networked appliances and buildings can conserve resources to a decisive extent. For example, exhibitors showed how energy management across different sectors can function by supplying houses or districts with locally generated energy and integrating electric vehicles. Portals which energy suppliers can make available to their customers and ensure more transparency with regard to energy consumption were introduced too. Vehicles which are driven by biomethane from straw bales caused a stir, as did smart street lights which offer WLAN, indicate free parking spaces and serve as charging stations for e cars.

Valuable Contacts for Start-Ups to Potential Investors
Many of these pioneering solutions for the energy sector are being developed by young firms and start-ups. 90 of them presented themselves to the expert world in the "Innovation" exhibition area at E world. Here, founders of firms and scientists received valuable support with regard to the search for investors. In each case in eight-minute slots in over 1,200 speed dating sessions, founders of firms and research facilities were able to make companies as well as other stakeholders enthusiastic about their projects and to initiate cooperation measures.

E world as the Think Tank of the Energy Sector
The visitors to E world originated, above all, from energy supply companies, service providers and municipal utility companies. In this respect, they were particularly interested in energy services, information technology and energy trading. With an informative supporting programme, specialist discussions and thematic lectures, E world once more proved to be the think tank of the European energy sector. In the congress at the fair, there were ten panels with high-ranking casts - amongst others, with representatives of the Federal Ministry for Economic Affairs, the Federal Network Agency, EWE, E.ON, Google Germany and RWE.

On the first day of the fair, over 500 participants obtained information about the guiding subject entitled "Focus on the Energy Systems, Industries and Cities of the Future" during the Specialist Congress for Future Energies staged by the North Rhine-Westphalia Energy Agency. Moreover, the four thematic forums called "Smart Tech", "Energy Transition", "Innovation" and "Trading & Finance" directly on the area of the fair were well-visited. For the first time, E world played host to the Fibre Optic Forum. Here, speakers from the political field, from trade associations and from municipal utility companies which have already had successfully activities in fibre optic expansion talked about the chances of the business field of broadband in Germany.

High Revisit Intentions Amongst Exhibitors and Visitors
This comprehensive available range consisting of a fair, information and a congress aroused the enthusiasm of the visitors. They gave the fair top marks. 95 percent praised the presence of the market leaders and 89 percent the internationality of E world. The fair is becoming increasingly attractive precisely for experts from abroad. More than one in four of the visitors to the fair travelled from outside Germany. Britons and Swiss were particularly strongly represented. On the occasion of the Consulates Day on the Wednesday of the fair, participants came, amongst other countries, from Chile, France, Indonesia, Madagascar and Singapore in order to obtain information about new solutions for the energy supply.

96 percent of the visitors and 97 percent of the exhibitors have now already declared that they want to participate in the next E world energy & water which will take place at Messe Essen from February 11 to 13, 2020.

E world 2019: Figures in Detail
E world is jointly organised by con|energy ag and Messe Essen. It recorded 780 (in 2018: 750) exhibitors from 26 (26) nations. The proportion of foreign exhibitors was 22 (21) percent. Also including the forecast for the last day of the fair, around 23,000 (22,500) registered trade visitors came to Messe Essen (according to the Society for Voluntary Control of Fair and Exhibition Statistics - FKM). The comprehensive supporting programmes were visited not only by international participants but also, amongst others, by guests of honour, press representatives and influencers, municipal representatives and sponsors. The trade visitor proportion was 99 (97.9) percent.

"We have experienced three intensive days on the E.ON booth. That is indicative not only of an interesting product portfolio but also of an attractive fair as a whole. The proportion of customers from European states has risen even further in comparison with last year. We registered a high demand for the E.ON Home energy management system as well as for solutions for electromobility. However, E.ON has also used the fair as a platform in order to establish or strengthen the contacts to other companies. All in all, E world energy & water has consolidated its position as the leading fair in the energy industry in Europe's energy capital Essen."

"With the advancing energy transition, E world has gained even more significance for us. Moreover, we are establishing that this leading European fair has become ever more international in recent years. Correspondingly, we see for us here the possibility of meeting the relevant contacts for the European business in order to jointly work on cleaner energy solutions with them."

"The visitors' response all in all and on our booth as well as the number of discussions were at least on the same level as last year. Thus, E world 2019 has more than met our expectations. We have been able to introduce a large number of innovative products from smart home via e mobility and energy-saving solutions right up to various network services to the international trade public which, as always, was extremely well-versed. On the subject of electromobility, we were particularly proud that, with our new generation of charging stations, we were able to present a world premiere at the largest German energy fair."

"E world is an absolutely special highlight for us every year and, since time immemorial, we have felt closely attached to the fair and its target groups such as municipal utility companies, distribution network operators or industrial companies. Our experience at the fair in the past years has shown that E world is increasingly developing into one of the most important fairs for the national and international energy sectors and, as one of the leading technology corporations in the world, we naturally want to and must be involved there."

Gundolf Schweppe, Chairman of the Board, Uniper Energy Sales:

"For us, E world was once again a total success this year too! We had the pleasure of greeting more than 6,700 partners, customers and interested people on our booth. In no fewer than two boxes, we have demonstrated new solutions for the digitalisation of the energy industry and let visitors immerse themselves in the digital energy world using virtual reality glasses. Our product innovation called the 'Green Full Supply' with which we are offering redistribution and industrial customers a reliable full electricity supply and, at the same time, flexible certificates of origin for the complete supply quantity went down very well too. On this subject and with regard to many other ranges on offer, we were able to provide our customers and interested visitors to the fair with advice in over 1,000 expert discussions and to introduce our product portfolio. For me, this figure shows that we are precisely on the right path with our available range of 'green' and digital products."

"E world has developed from an energy suppliers' fair into the leading European fair for the complete energy industry. No matter whether energy suppliers, municipal utility companies, infrastructure suppliers, municipal decision takers or software manufacturers - all the top players were there. Here, we were able to meet the decision takers from customers and partners who are turning urban visions for smart cities and smart energies into reality."

"For Axpo, E world was once more the ideal place in order to exchange ideas with customers and business partners, to present innovations in the field of tailor-made customer solutions and to discuss the latest trends in the sector. There was a continuous stream of people from the sector on Axpo's redesigned fair booth in Hall 3."