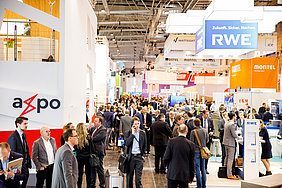 At the start of the year, the time had come around again: those from the sector gathered at the annual "Class reunion" in Essen. Whoever wants to know what is driving the international energy landscape, which solutions suppliers have contributed to the transformation of energy systems and to the energy turnaround, needs to visit the trade fair, if they haven't already.

More and more municipalities and administrations are taking advantage of E-world, in order to find out more about Smart City topics and innovations in the field of urban infrastructure and its networking. This year, the State of Berlin was one of the visitors. The Senate Administration for Economics, Energy and Public Enterprises (SenWEB), which has recently become the owner of a newly founded local utility company, responsible for the Smart City concept and digitalisation as well as the fundamental issues of the energy policy, visited E-world along with representatives of the Business Development Agency (Berlin Partner für Wirtschaft und Technologie GmbH) responsible for the capital.

The aim of the trade fair visit was to gain an overview of the exhibitors, topics and visitors and to discover whether E-world may be a suitable location for establishing contacts, initiating discussions and being inspired by the administration work.  The State of Berlin is ultimately implementing a number of lighthouse projects with a relevant energy consumption and with the Cluster energy technology Berlin-Brandenburg, through which the WindNODE Consortium was initiated, one of the SINTEG smart energy showcases. These include more than 5,000 companies, research institutes, universities and colleges in the region of the capital, who work and carry out research in areas associated with energy technology and environment-related issues.

nymoen|strategieberatung provided the colleagues of the Senate Administration for Economics, Energy and Public Enterprises and Berlin Partner with a guided tour of the stands for Siemens, ENGIE, Bosch Software Innovations, Allianz Smart City Dortmund, bne and TU Berlin, bringing them up-to-speed with the new innovations and developments in the sector. In a final discussion, the State and Company representatives exchanged ideas on what was needed and envisaged for the cities en route to becoming Smart Cities and what kind of specific offers the economic field can offer to assist them here.  What's more, a conversation was also held regarding who should control the Smart City and whether or not this would have to be an official duty.

Head of Department, Dr. Jürgen Varnhorn, reported positively on the trade fair tour of his administration: "Visiting the stands, the subsequent discussion, the individual appointments and visits to the seminars were extremely interesting for us and have resulted in new perspectives and broadened knowledge being acquired.

Even Juliane Hauskrecht, Managing Director of nymoen|strategieberatung, found the exchange between the administration and economic department extremely successful: "The final discussion proved just how important it is for us to intensify our dialogue. Dialogue creates understanding, respect and solutions. Indeed, we gained comparable feedback from all exhibitors, who we visited on our tour and who greeted our delegation in such an interested manner.

It would appear that the delegation of the Senate Administration for Economics, Energy and Public Enterprises and Berlin Partner were not just impressed at first sight. In the meantime, Berlin has opted to have its own stand at the upcoming E-world.

Delegates from more than 25 nations - including Israel, Sweden, Kuwait and Cuba - came to today's Day of Consulates at Messe Essen to find out about new solutions for energy supply.

E-world energy & water as a career springboard for young talents

Career Forum with a record number of participating companies